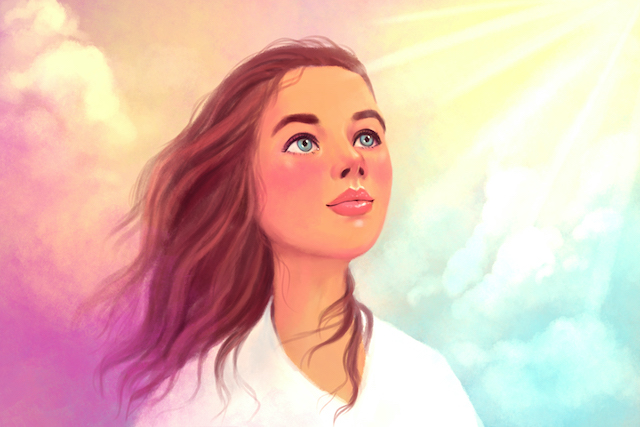 “How people treat other people is a direct reflection of how they feel about themselves.” ~Paulo Coelho

He used to tell me no one else would love me because I’m damaged goods.

Since I was a teenager, I have received many messages that indicated there was something wrong.

I wasn’t good enough. Too sensitive. Too fragile. Too sickly. Too different.

I realize now those messages were passed on to me by concerned parents who saw in me parts of themselves they didn’t fully accept.

These messages came from parents who had themselves used criticism to encourage them to be better. They didn’t know another way. They just wanted to see me succeed.

It was a sentiment that my HSP-soul took to heart. This was what I meant.

Then I ventured into the world as an adult choosing romantic partners who confirmed every single belief I’d held about myself since my developmental years.

This is a common cycle we perpetuate when we’re not aware that programmed conditioning is running the show.

I attracted romantic partners that played out all the emotional dysregulation from my family of origin—to confirm to me that everything my caregivers had told me was indeed true.

However, I also wanted to find someone who would love me unconditionally and give me acceptance. I thought that would finally make me feel “normal.” I thought I would finally feel whole.

I left almost a decade ago when I was in my worst and most dangerous romantic position.

Looking back, I can see that my friends were concerned about me and my safety while I was in this relationship.

It was because I felt I deserved the treatment I received that I had decided to leave. I believed that anyone who claimed to love me would do so for a reason.

Although deep down inside, I had an inkling that this didn’t feel right. Maybe it was better to feel alone than in a relationship that made me feel horrible.

When I finally stood up for myself, he made sure I knew that if I left, I’d be destined to suffer alone forever because no one else would be willing to love a broken soul like me, and that I would indeed suffer greatly.

He kept telling me the same thing over and over until I was broken. Until I believed him.

Two years was needed to be completely free.

In the end, what helped was seeking professional support—a wonderful counselor who helped me see that the situation I was in was harming me.

It was true, that my soul was in decline. I was becoming a shell of who I was, and I hate to think where I’d be now had I stayed.

Counselor helped me to reach a new understanding with myself about what I would tolerate in my daily life.

It was the first step in an awakening to some important truths I hadn’t seen before.

The inner healing was my goal.

Many a time, I was a sobbing wreck on my yoga mat.

Even though they were unpleasant, I accepted the feelings that came up and sat down with them. Fear, shame, guilt and anger. It all.

Listening to these difficult emotions was a way for me to process them. They were numerous.

After I had met my inner child, and became close to her, I realized how scared she was. I was the only one who could give her the comfort and assurance she needed.

A dark night for the soul was what I experienced. The second, of the three. The second was just as painful as the first.

As the first one, the dark night brought me to the realization that my path was not leading me towards the truth. It was me moving away from my inner light and not towards it.

That was my jolt to make a change. Then, I was able to get the courage and strength to move on without repercussions.

I didn’t yet know where I was going, but I knew it was going to be a different direction than where I had been. It was inevitable.

It was a change in my outlook that changed the course of my life.

They were completely different from the people that showed up. People who were encouraging, supportive and accept me for my uniqueness.

Or rather, I stopped letting in the wounded who didn’t accept me in all my bright, shiny perfect imperfection. I set new limits that stopped those who weren’t comfortable with my light trying to dim it.

So, people with potential shine have more space around me.

I’m now in a healthy, emotionally stable, and incredibly supportive relationship. It’s like night and day. It’s amazing to see the differences.

I now see that those manipulations and insults my ex threw at me were his way to control me because he didn’t feel in control himself. This was his way of coping.

He likely learned this behavior from his family. It is this way that wounds can be passed on.

But at the time I didn’t understand, because I was taking in those comments from a completely different perspective.

Hearing those comments made to me from the assumption that something was wrong with me led me to believe that he was telling the truth.

Please know, beautiful soul, that you are worthy of love in every way—especially and most importantly love from yourself.

Anybody who says otherwise comes from woundedness. Don’t let them drag you into their traps.

Keep your eyes on the prize. Keep your faith in the truth.

Some may think your light is too bright, but that’s because it illuminates the wounds they’re not yet ready to face.

As a result, they’ll try to dull your light to protect themselves.

Your unique light will be loved by those who love you and inspire more.

They live out their truths and make their light shine bright.

This is what my love does every day.

He doesn’t think I’m broken—he thinks I’m beautiful, inside and out.

He is aware of my wounds.

And the lessons I’ve learned and strength I’ve gathered because of those wounds makes me wiser.

This is something he likes about me. The emotional maturity I’ve gained through my journey makes me that much more appealing to him.

And I’ve also come to realize on my journey that I don’t need his love or anyone else’s in order to find my own within. That’s the most important lesson of them all.

Michelle Dowker MSc, ND, is a Naturopathic doctor and Emotional Transformation Facilitator. She is the authority in Social Unconditioning and founder of The Remedy Within: an exclusive & powerful healing approach for women with chronic illness to release what’s holding you back and unleash your inner healer within so you can soar. You can find out more about her here, and don’t forget to follow her on Instagram @wellbalanceND for more inspiring content

Tiny Buddha published the post Why I felt broken and unworthy of love and what changed everything first.