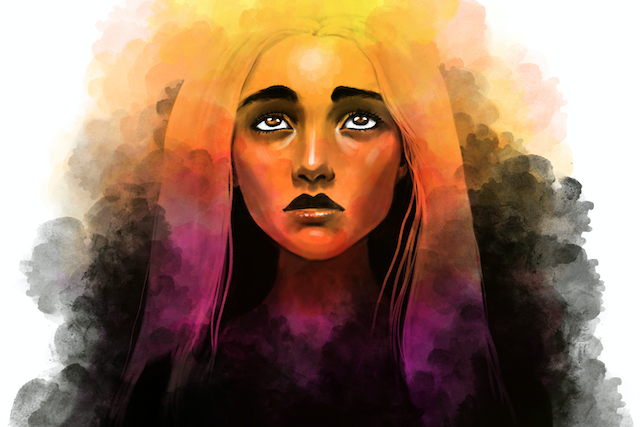 “Losing my mother at such an early age is the scar of my soul. It was a turning point in my life that I believe made me the person I am today. The journey is what I know. I had to go through what I did to be here.” ~Mariska Hargitay

On July 18, 2020 at 6:07 PM, my boyfriend and I were sat on the couch together. My migraine had caused me to cancel plans that I made with friends on Saturday night. After having eaten, I was still in bed and watching television. My phone rang—my dad. “I’ll call him back later,” I said, flipping the phone over on the couch and returning my attention to the television.

A text message from my father to my sister was sent three minutes later.

“Girls, I do not want to alarm you, but I am at the emergency room in Asheville. When your mother was riding her bike, she was struck by a car. They have her now, as an ambulance was there quickly. I am doing some paperwork at the front desk, so I don’t know her condition. You will be kept informed. Love.”

My boyfriend was concerned when I gave it to him. It was possible she might have fractured an arm or a leg. My mother was a newbie to breaking bones. I answered my father’s Facetime. The hospital’s waiting room was behind me. Crowded. He looked at me. I felt my stomach knotted and migraines pounding.

I looked at my sister’s face. The tiny square in my phone’s screen was all that remained of me as I gazed at my sister. As my dad described what had happened, my eyes bore into my twin’s, as if I could make everything okay if I just looked at her hard enough.

The story was told by my dad, stopping occasionally to talk to the doctors and the hospital chaplain Jim. He remained nearby. It was that moment I knew something was wrong. There were so many people waiting in that room and the chaplain only spoke to Dad.

I’ve heard this story thousands of times by now. Each detail I remember is mine. So I’ll tell it in my words, not his.

Jane and John Beach, both aged 21 years, left Saluda in North Carolina with their mountain bikes attached to their Toyota Four Runner at 3:32. The couple drove up to Pisgah National Forest, near Asheville. They planned to ride their bikes before going to the favorite brewery to have dinner.

Jane and John finished their ride at 5:21 p.m. They made a left on Brevard Road. John went first. Jane came after John.

Hannah, 25, was speeding down the road at 5:22 am. Hannah would have passed Jane if she had turned left at 5:23 PM. Instead, Jane was hit from behind by Hannah’s tan Buik Sentry.

John heard the impact of the crash and skidded to a halt. He then threw his bicycle across the road. His wife was lying on the pavement, so he ran sprinting towards her. Her bike was also destroyed. Her helmet split in two. Hannah drove off, her helmet split in two, and Hannah was covered with bloody hood.

Jane was admitted to Mission Hospital and intubated. She received excellent care and attention. My mother died at 7:18pm. I found out via FaceTime. My father was still crying.

On the same day that my mother died, I was part of an international community made up of hundreds of thousands who were also grieving. If you’re reading this article, you’re probably part of my community, or maybe you love someone who is.

During the months after my mother’s death, I would lie in bed at night and think about everyone I was connected to, everyone else who was lying in bed, unable to sleep because they were thinking of someone they loved and lost.

Since then, I’ve learned a lot about grief through articles, books, podcasts, and speaking to other people who were going through similar experiences. To understand the process of grief and how it can be overcome, was my goal. It isn’t something that can be healed. You carry the loss of someone you love with you for all eternity.

Sometimes, grief can be transformed into something that is beautiful and reminds you how strong and capable of loving and being loved even when it hurts.

Dumbledore said it best when he said, “To have been loved so deeply, even though the person who loved us is gone, will give us some protection forever.”

It can be a great learning experience to learn how grief is embraced and accepted. Here are four powerful lessons I’ve learned from my grief.

It was hard to be a mother after my mom passed away. Not only was I in physical pain, but I felt as if all of the mental health struggles I’ve wrestled with for most of my life (anxiety and hypochondria, to name a few) were bubbling back up to the surface and threatening a takeover.

The grief process can cause old hurts to resurface and overwhelm other emotions. That’s why self-love and self-compassion are essential to ease the suffering that comes with grief.

Self-compassion isn’t an easy thing to learn, but a good way to begin is by making a list of things that comfort you and making time for those things. Show yourself love by putting in effort.

My grief taught me to take care of myself. My favorite things to do are take long walks, take a bath, read a book and relax. I’ve found that these moments of stillness and calm help me get through the moments of chaos and sadness and fear and frustration.

An overwhelming number of emotions can be triggered by grief. People who are grieving feel their emotions very strongly, whether it’s sadness, joy, fear, or relief. Even a year and a half after my mom’s death, my emotions still hit me like bricks, and sometimes I really don’t see them coming.

It’s natural to try and avoid the more uncomfortable emotions, like anxiety or fear, but that just makes them stronger. You can instead sit with the emotion. Feel it fully and let it exist.

Mindfulness, or grounding yourself in the present moment, can really help when you find yourself pushing an emotion away because it’s too painful. You can try sitting in silence in an empty place. Imagine your emotion sitting beside you. Keep in mind that you don’t control your emotions. It doesn’t have to control you. You don’t have to push it away out of fear.

Another thing that’s important to remember is this: it’s okay to feel things. It’s okay to feel sad or angry or frustrated. Don’t push away any feelings because you think they’re “wrong” or “not helpful.” When you’ve gone through the trauma of losing someone, all feelings are valid. Let emotions live freely and recognize that you’re going to have good days and bad days.

Lesson 3: Reminders and rituals are therapeutic.

My mom’s death caused me to struggle with how I could think about her and not feel pain. All that was reminiscent of her, I kept hidden. Also, all my photos were taken down. Recalling her was like gazing at the sun. I found comfort in these reminders, but eventually gave up. It was my desire to see her face and talk to her.

Today, her wedding ring is my constant companion. I think about her every time I see it. I still enjoy earl gray tea and think back to the time we spent sipping coffee in Barnes and Noble’s coffee shop. I wear her favorite sweatshirt and think about the day she got it when she wasn’t much older than I am now, and she was pregnant with me and my sister.

Staying connected with your loved ones after they’re gone can be tremendously comforting. Many rituals can be used to achieve this feeling. Below are some of my favourite ideas.

Lektion 4: Make friends with people who get you.

My healing journey has included talking to women in my twenties who lost their mothers. I’ve met so many strong women who have overcome loss and trauma and used their grief to become better versions of themselves.

The Dinner Party was the source of one of my closest friendships. My mom had died a few weeks before I joined The Dinner Party. I didn’t think I would get much out of it. A few weeks later, I got an email saying that I had a new “buddy”—a girl only a few years older than me who had lost her mom in a biking accident just one month before I lost mine. A year and a half later, we still facetime regularly and are a big part of each other’s lives.

It is great to talk to someone with a similar life story to you. From how to support our newly single dads to how to bring up your dead mom to a new friend, we’ve talked through so many things that are meaningful and important to me. We’re close friends, and she has been a great joy to come out of this difficult tragedy.

Losing my mom has undoubtedly been the most difficult experience of my life, but I’ve learned to love my grief throughout my journey. This has helped me to be more understanding and compassionate. I also know my purpose and myself better than ever before. Although I’d give it all for my mom, I am certain she would be proud to see me right now.

Norrie Beach, a blogger and freelance writer who loves mental health and well-being. Her passion is for helping others and improving herself. She loves to write about managing grief and mindfulness. Read more of her writing on Medium at https://norriebeach.medium.com/.